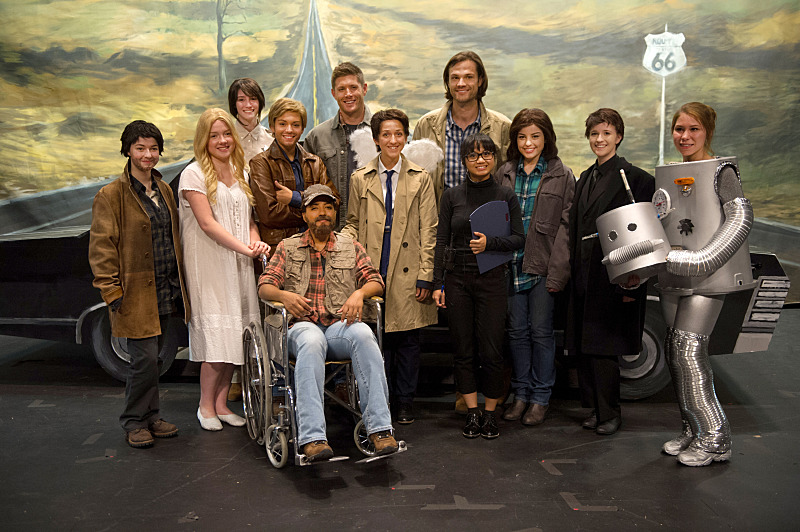 SUPERNATURAL CELEBRATES ITS 200TH EPISODE — When Sam (Jared Padalecki) and Dean (Jensen Ackles) investigate the disappearance of a teacher, they are stunned to see the school is putting on a musical based on their lives. Familiar faces abound in this milestone episode. Phil Sgriccia directed this episode written by Robbie Thompson (#1005). Original airdate 11/11/2014. ksitetv.com

The CW hit is tackling a major first in Season 10: At the 2014 Summer TCA Press Tour, showrunner Jeremy Carver revealed to E! News that Supernatural’s 200th episode will be something of a „musical-ish“ episode, which the longrunning series has never done. Feel free to take a moment to bask in the sheer awesomeness of this idea.

„I think it’ll be one of the more amusing and engaging episodes we’ve done in a while. I think we can safely call this a meta episode,“ Carver previewed of the milestone outing, which will be the fifth episode of the new season. „We’re going pretty meta. I would just describe it as something of a love letter to our fans and there will be songs.“

Of course, we had some immediate follow-up questions:

Are Jensen and Jared singing? „I cannot comment any further than that. [Laughs.]“
Will there be dancing? „Potentially.“
Is it just one song? „There will be more than one song.“
Will they be original songs or covers? „There will be a little of both. It’s just going to be real fun and it’s a real celebration of the show and particularly the fans of the show.“

Source Title Picture: Behind the scenes at CW’s ‚Supernatural‘ with Alyssa Lynch as Shiobhan, Jensen Ackles as Dean, Jared Padalecki as Sam, and Natalie Sharp as Maggie.(Photo: Katie Yu, CW)