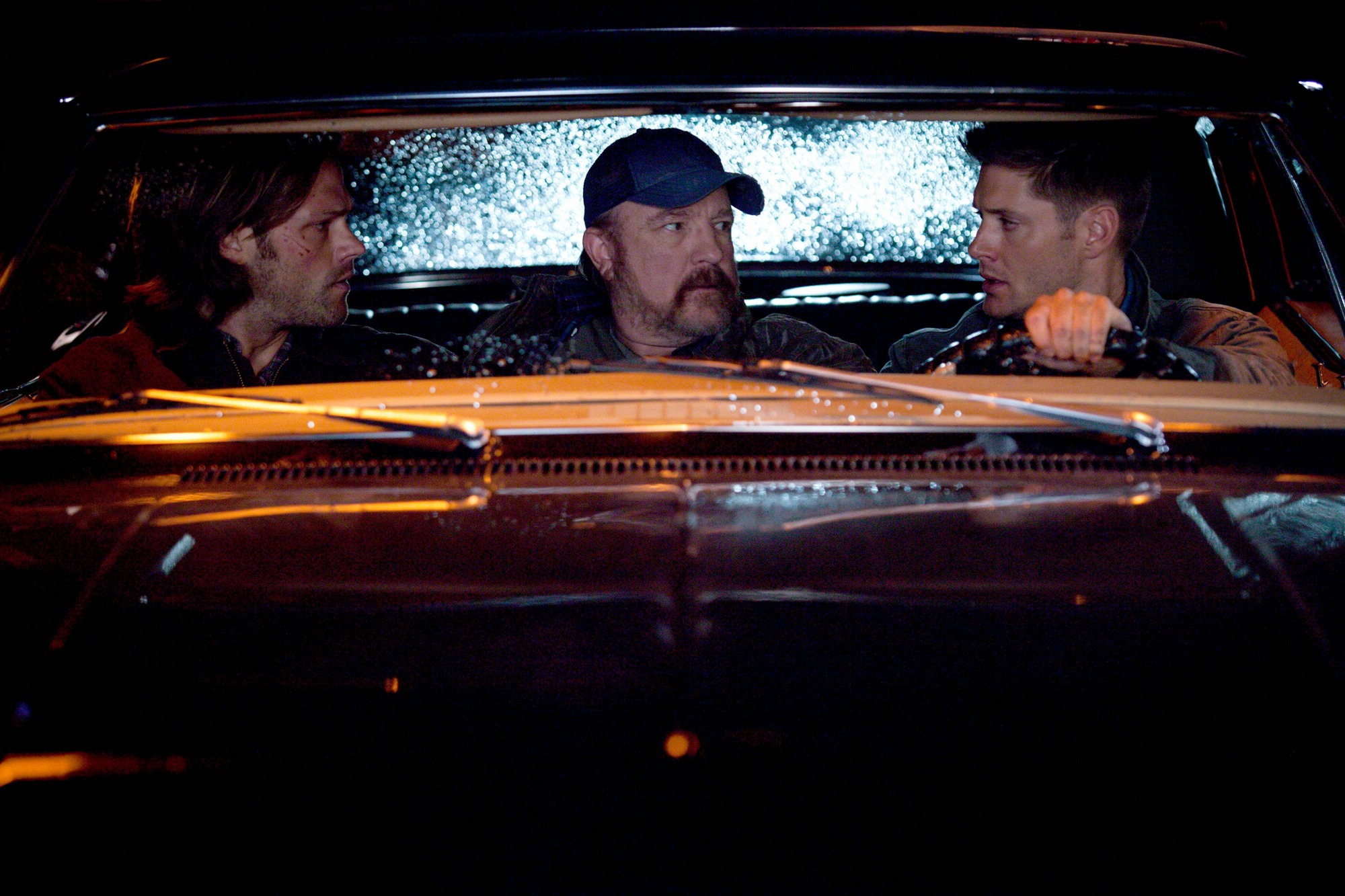 FALLEN ANGELS — Dean (Jensen Ackles) is frantic after Sam (Jared Padalecki) collapses and the doctor tells Dean his brother won’t make it. Desperate, Dean sends out an all points bulletin via prayer to every angel in the area, asking them to help his brother. In exchange, Dean will owe that angel a favor. Numerous angry angels race to find and kill Dean, but one, Ezekiel (guest star Tahmoh Penikett), gets to him first. Meanwhile, Sam fights for his life and must face some familiar demons to do so. Castiel (Misha Collins) struggles to survive without powers. John Showalter directed the episode written by Jeremy Carver

Thanks so much for being with ackles and me tonight! He’s still „not sure about this twitter thing“ but we loved our last hour with yall!

„We got work to do“. One of my favorite themes of supernatural.

@mishacollins it’s called a push-up. Try it some time.

Hope y’all like the Ezekiel stuff so far. It’s been amazing to have the chance to do it.

It was/is important to me that Ezekiel is not affected by things that affect humans. I.E. sunlight and warmth

This scene took FOREVER!!! Hot July day in Vancouver and we were both sweating so bad! As Ezekiel, I didn’t want to sweat or squint

I liked SAMs „what do I do“ to dean in the cabin. It was a nice shout out to his „how do I stop“ in the season 8 finale. Full circle

Hahahah!!! JA hates being covered in fake blood. Part of me thinks he’d be more comfortable if it was from real injuries.

Here goes… Ezekiel… Dean… What stories do they need to tell?!?!?!

Ah. Death. So we meet again.

@Mark_Sheppard I will say this, the trunk smells!

Jensen is playing the version of dean that Sam would imagine in his head telling him to stay alive. Mind-trip…

That is the MacGuyver cabin!!! With Young MacGuyver standing in front of it 🙂

That was jensens badass stunt guy Todd Scott running through the hall. They used real glass, so insurance wouldnt let ackles do it

THAT’S why we used a fake hospital, because hospitals don’t like when you destroy them 😉

@mishacollins gets beat up by a girl… Again,..

@se4realhinton @jumblejim very true! Though I’d never admit it to his face 🙂

Once again, NONE of the hospital scenes were filmed at an actual hospital. They were ALL on our stage!

@jumblejim and my scenes in the forest were filmed in the GVRD around Mt Seymour. We were talking about presidents (he knows more than I)

All of the fire around Tahmoh is visual effects. No real fire. Great job VFX! So the scene is hot because of the actors, not the fire!

@mishacollins asked to sit in the scene with the angel Hael. This is so he wouldn’t look so girly.

Tahmoh does such an amazing job as the angel Ezekiel

JA says the last time he got his face slammed into the impala was in the pilot. Anybody able to prove him wrong?

Part of the reason Shepard had scenes in the trunk, and (later episodes) under a good, is because he had scheduling conflicts

@bodyguard4JandJ  obviously, clif was unavailable to play the biker on the phone who wants to stab @mishacollins

@jumblejim We always love to have the three hunters back in the impala again. No matter what they’re arguing about 🙂

Originally, deans character brings up an embarrassing personal story about Sam to prove that they’re in SAMs head. They cut those lines

The chapel scene only took ackles two cameras for two takes. This is because of the extremely emotional nature of the scene.

And the „heart moniter“ machines next to me kept going off, causing us to restart the scenes

The hospital scenes were all filmed on our sound stage, not an actual hospital

First trivia: due to scheduling conflicts with Shepard and osric, we films this episode 2nd. Not first!

Oh yeah, and I brought a friend to help tweet 🙂 can anybody guess who?

Warning: if U R not watching the season premiere right now OR you dont wanna get a TON of tweets for the next hour, unfollow me!