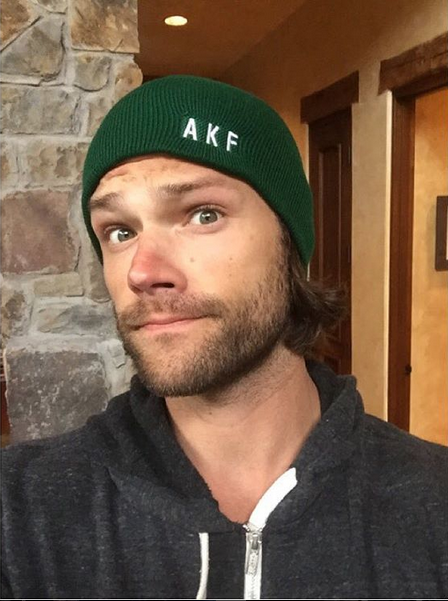 On TV, Sam and Dean are currently fighting ‚The Darkness‘. In reality , Jared Padalecki has opened up about his struggle with his inner darkness, earlier this year. Fans all over the world were shocked to the core while the news also sparked a wave of sympathy. Usually, celebrities tend to keep a flawless picture of themselves in public. They live happily ever after, in a sort of way , but not Jared. We were not only shocked, but also taken totally by surprise, when he started talking about ‚depression‘ and ‚mental illness‘ in general.

Unfortunately, many of us know this feeling all too well including me. The days, when you are surrounded by darkness that turns darker with every second ticking by, or where it feels you carry the burden of the whole world on your shoulders. And you can’t escape, because you can’t run. It feels as if you are wading through molasses. Every step turns into a struggle, until you get stuck.

People around you don’t understand what you are going through. Most of the time. They come along with tons of good ‚ideas‘ to cheer you up. Tell you that you’re just experiencing some kind of mood swing. Or avoid your company altogether. Hey, it’s much easier to cope with funny people. We all got our own burden, no need to deal with those of others. And so you’re put into a corner. It’s better to leave you there and wait until it’s over. Things can only get better, can’t they?

And that’s the point where Jared stepped in and told us we shouldn’t underestimate things. Depression is no mood swing or something you can get by with a glass or more of alcohol, or a day at the fun fair, or a shopping trip. Depression is a disease. It leaves no pockmarks or visible bruises. Mankind has achieved a lot in the field of medicine throughout the last centuries. But up till now there’s no apparatus (x-ray or else) that detects bruises of the soul. Therefore some people think mental illness isn’t something serious or even doesn’t exist, because there’s no visible proof. You can’t touch it. They say: ‚It’s just a state of mind. Stop being a child. Some people have it worse. End of story‘.

Sorry, this is so wrong. Don’t judge someone till you haven’t walked a mile in his or her shoes!

We need people like Jared. People who get involved with the media and fans and probably the whole world to talk about ‚their inner darkness‘. It takes a helluva courage to get into the limelight and out yourself. It takes even more courage not to just talk about it but also start a campaign. ‚Always Keep Fighting (AKF)‘ has become a synonym for showing courage and strength in times of darkness. These words have proved that there is hope and we are not alone. It’s not a matter of sex, age, race or religion.

Jared himself did a lot in the past and present to fight depression. For him, and for all those who follow his lead. Many of us know him not only from his TV roles, but have met him in person at several conventions, where he’s always a sunshine and wonderful with the fans. I never thought about him as being vulnerable. He’s Jared Padalecki, he’s this super-hot, super-friendly guy from Supernatural. He’s Dean’s brother. He’s been through hell and back. He’s invincible.

How wrong was I. If we take a closer look at the numerous convention pictures, where he looks thoughtful or earnest, we can almost sense it. Underneath this surface, something is brooding. I had to realize I was barking up the wrong tree. I mixed up his character with the person behind it. And didn’t think that a Celeb would have to deal with ugly things like mental illness or suffer from self-doubt or whatever. We always think the grass is greener somewhere else. Until we get to know it better.

I’m glad Jared chose to wear his heart on his tongue by writing these lines at the beginning of his ‚AKF‘ campaign:

The Story Behind The Shirt

On New Year’s Eve, my dear friend lost his battle with depression. This, unfortunately, wasn’t the first time I lost a personal friend to suicide, and it hurt me deeply, in a way that only a personal experience with suicide can. Though he wasn’t the first friend I’ve lost to suicide, I sure hope he’s the last. I wish I had the chance to go back and tell them what they meant to me. I wish I had the chance to beg them to seek help, to keep fighting. I wish they knew that they were surrounded by countless others who struggle on a daily basis.

For people who deal with mental illness, depression, addiction or suicidal thoughts, every day can bring about new struggles. Every hour and every minute can seem to bring insurmountable odds of happiness. I hope that the simple message of “always keep fighting” can help to bolster somebody through a tough time. I also hope this campaign can help alleviate some of the stigma that the terms “mental illness” and “depression” sometimes evokes.

Everybody has either dealt with these issues themselves, or had a loved one who deals with them. It’s time for us to put these issues front and center and not be ashamed of the path we are walking. If you’re out there and need help, please seek it. Be proud of your valiant day-to-day struggle. There is no shame in needing support. I hope this campaign will help you be vocal about your own struggles, or vocal in your support of those who might need a helping hand. Most of all, when life seems to want to beat you down, I hope you Always Keep Fighting.

I’ve still a big fat lump in my throat by reading these lines. Nonetheless, I have to admit I was skeptical around the beginning of this campaign. We’ve seen things like it too often. Celebrities go for a certain cause, set a trend, start a campaign, and forget about it the very next moment.

Jared took fundraising to a whole new level and showed us that it can be much more than shallow thoughts and hollow phrases. Months later, AKF is in our hearts and minds. We know what it means, what people talk about when they mention those three letters. Meanwhile you can buy shirts, beanies, candles and other stuff to show your support. You can write about it on your blog, on social media sites or drop Jared encouraging lines on his several social accounts.

Jared touched a sore point by raising awareness for mental illness in general. He had the guts to talk about how people affected hide from the outside while being ashamed for “being different”. He surely knows what he’s talking about because he’s one of us.

It’s not always your fault or your inability to struggle with day-to-day-life. (Sh)it happens. Different circumstances may lead to it. But it’s on you to kick yourself into your ass and do something to get back on the road again. Professional help, a therapy group, whatever helps you fight your inner darkness, works. But don’t forget: the darkness won’t vanish completely, it’ll accompany you for life. We all have our inner demons, we can learn how to deal with them. For my part, I’ve found a way to embrace the darkness, let it in. But I don’t let it rule my life.

Mental illness has been a taboo for too long. Jared and his AKF campaign broke with this taboo. If you haven’t read or heard about the incredible hype this awesome campaign has triggered, you’re probably living on the wrong side of the moon.

Thank you Jared for being there with and for us, and please: Never Stop Fighting!