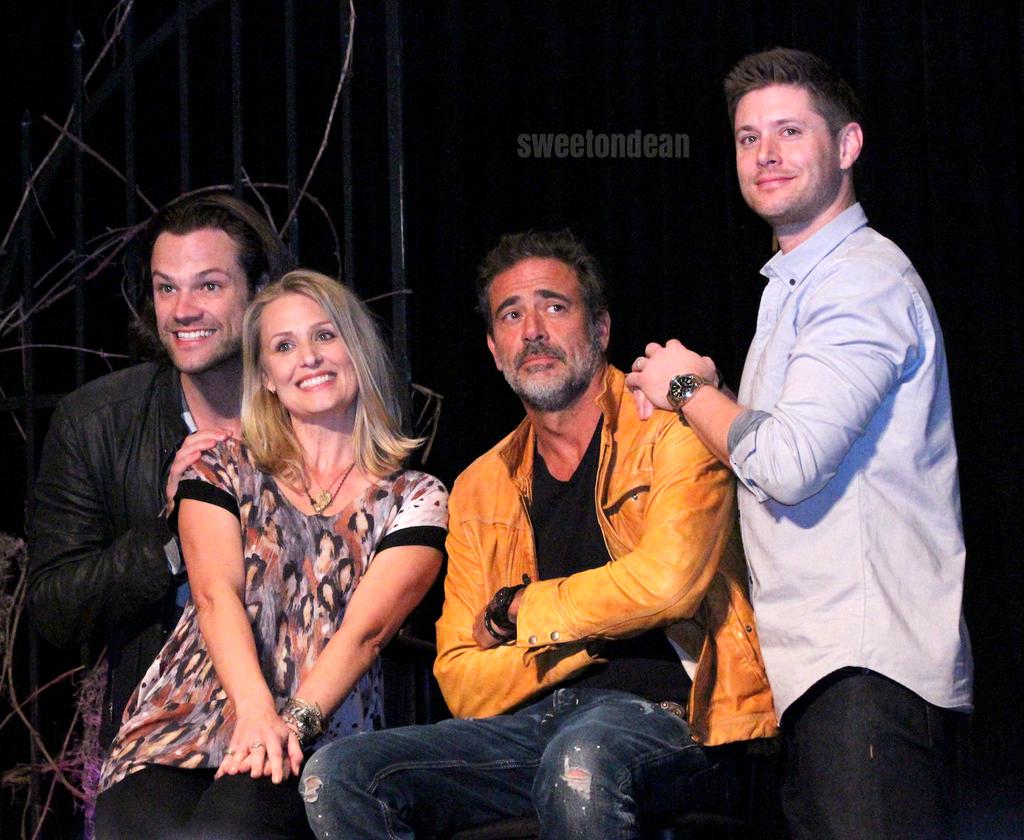 Dad Has Finally Returned From His Hunting Trip!

Creation’s masterstroke or a family reunion of the special kind

First, to not lead you to the wrong conclusion: I haven’t been there but I tried to cover this mega event as well as possible thanks to awesome tweethearts, facebookers and instagrammers, who truly made our days and let us participate. Bet many of us sat clad in their PJs or casually dressed in front of the screen and clung to all news that were posted. Especially on Sunday, when Jeffrey Dean Morgan joined the tour for his first time, ever!

Welcome on the road to perdition. I have been on it since my first convention in 2008, which took place in Orlando, Florida. I was a first timer, then. And I had absolutely no clue what to expect. Though I was the only one from Vienna (Austria) there, I was welcomed like I’d been part of the fandom for ages. Overwhelmed by the whole weekend it took me weeks to be able to leave cloud 9. That was when I learned about „con blues.“ But enough of me, back to Vegas 2015.

The Supernatural fandom – which sounds similar to wisdom, but is sometimes the exact opposite – had been in an uproar since Creation Entertainment announced the appearance of Jeffrey Dean Morgan aka John Winchester. It was his first convention for the show, ever.

Aside from the tremendous line up and great panels everyone at home and in Vegas was waiting for the one and only JDM (that’s what many of us call him tenderly). Even sitting at home and inhaling all the info that popped up on my screen I could feel the tension building up until we all were hit by it.

We didn’t have to wait until Sunday. It was Saturday’s evening event called „Cabaret“ that hit us like an oncoming freight train. You know the thing with the light at the end of the tunnel.
Many fans captured the moment when Jensen Ackles and JDM hit the stage. Eye candy for those of us who couldn’t be there and desperately whished to be there, and the fans in Vegas. It was the moment when Jensen took the microphone and started singing from the bottom of his heart. That earned him „Rock Star Status.“ Wow, ovaries on override and sometime later I think I heard some of them go „pop.“ What a night it must have been. Again, I wished I could have witnessed the whole event in person *sighs*.

Thanks a bunch to all of you who provided us with material that will find its way onto our hard drives, where it will be stored to the end of time, amen!

And then came Sunday, and the long awaited, anticipated panel starring JDM started. Hanging on the edge of my seat and biting my nails, I watched the tweets coming in. I reminiscenced my con experiences (that seemed to be ages ago) and what I felt when I sat in the audience. When your heartbeat increases and finally hits your throat. When the palms of your hands got all sweaty while your throat turns into Mojave desert. I could feel it, relive it. Suddenly it felt like I was sitting with all the other fans in the panel room. It’s that magic moment when we all become one. One mind, one soul. That’s what make these events so special, to share it with so many and to be united with people from all over the world. And to be there for only one thing: Supernatural. More than a weekend without getting labeled a crazy, or fangirl, or whatever some people think about fans participating in a convention.
JDM was there and fan hearts melted like ice in the sun shine. @CarryOn_SPN tweeted:

Standing ovation for JDM. Jeff: Holy crap. What took me so long to get here?! I want to live here. #VegasCon pic.twitter.com/cLxiC5bbOz

It gave me chills and I bet I wasn’t the only one. We’ve captured the whole panel on Storify:

The icing on the cake was when Jensen, Jared and Samantha Smith aka Mary Winchester crashed JDM’s Panel. What happened was an off screen Winchester family reunion of the special kind. I think nothing we will ever see in the show. Mom, Dad and the grown up boys. Countless pictures were taken to keep that special moments in our little time capsules also known as hard drives. Lovely Samantha Smith provided us with some of her favorite tweets and retweets, and titled one of these „awkward family photo“ which put a big fat grin on my face.

I think this one is my favorite I've seen so far! #JDM @JensenAckles #VegasCon pic.twitter.com/llcQi1HobY

A HUGE THANK YOU to Creation Entertainment for that masterstroke. It left us all speculating about a possible return of John Winchester to the show.

Furthermore JDM’s appearance took me on a trip down memory lane. I remembered the 1st Season and how Kripke and also the late Kim Manners (he is and will be truly missed) lured us into watching something unique and special. For me they are like the Pied Piper of Hamelin. They led the SPNFamily on a road trip that’s still not coming to an end, yet.

Isn’t it great to be part of all this for such a long time? You asked if I’m addicted? My answer: HELL, YES, I AM! It’s the healthiest addiction one could ever have. Together we are waiting for our weekly dose of Supernatural (now on Wednesdays). Together we suffer from hellatus and con blues. And to get through the darker hours, I know that I’m not alone, either. This is a SPNFamily thing. If I need some comforting and/or want to hang out with kindred spirits, I simply switch on my Laptop and can hang out with all the other fans out there, near or far.

There’s only one thing left for me to say: let’s buckle up and ride shotgun (you know Dean’s saying about shotguns and cakeholes and so on) straight into season 11! Dear SPNFamily, thank you for being there, thank you for reading!