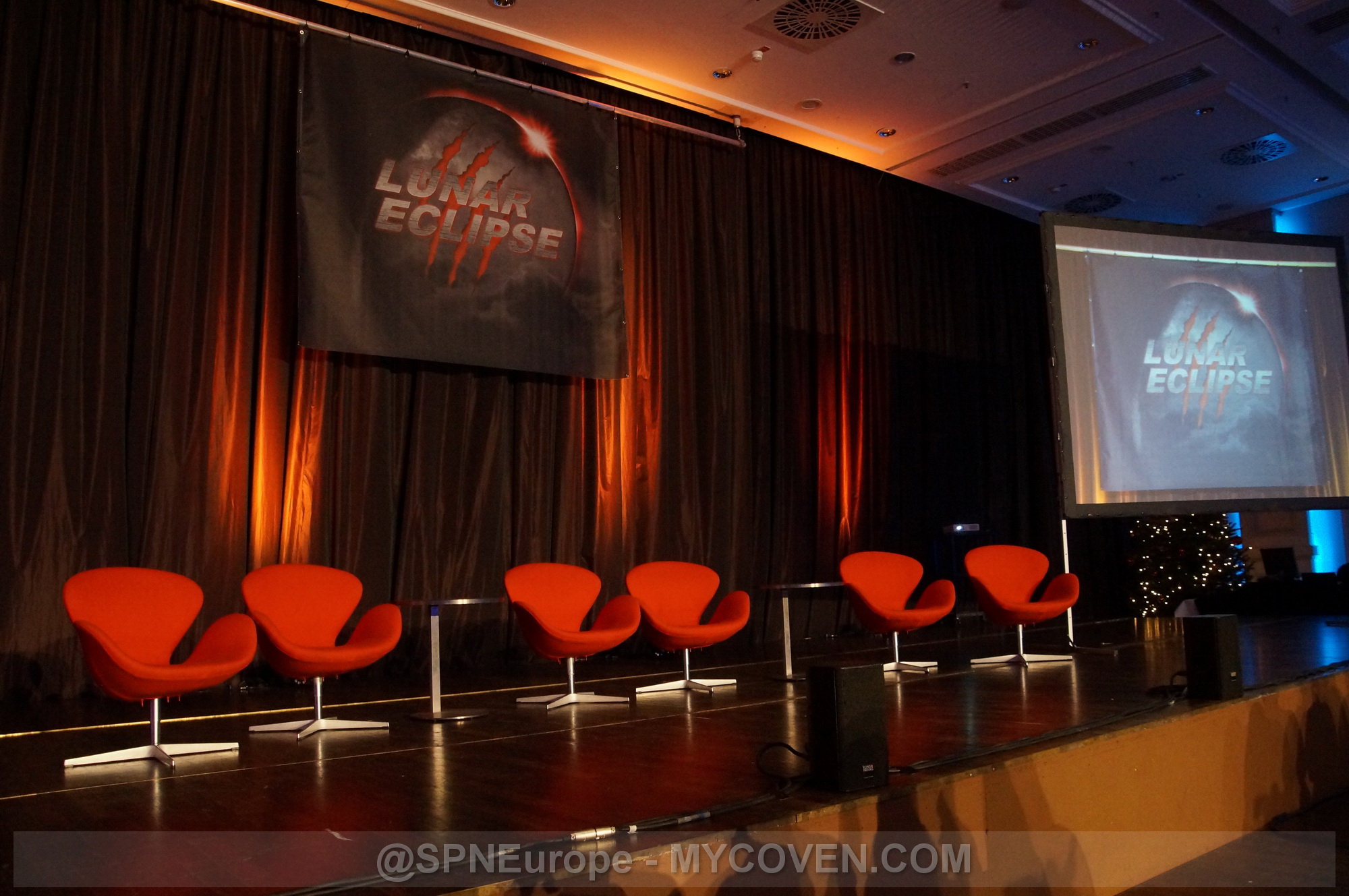 2014 has been a tough year for me and I was thinking about doing something good for myself. You know these little treats you should give yourself once in a while. I was thinking about spending a weekend at a beauty farm. On the other hand, that was a tick too posh for me. Then I thought about buying some expensive shoes or a bag. Or…. what happens when you have had too much time to think about it. For me, it’s much easier to buy a gift for someone else.

While I was wrecking my brain, I came across an announcement for a Teen Wolf convention named „Lunar Eclipse“ in Düsseldorf (feat. Tyler Hoechlin, Orny Adams, Ian Bohen, Ryan Kelley, Keahu Kahuanui, Holland Roden). The first one ever in Germany. There wasn’t really much time between the announcement and the convention itself. But I trusted Entertainment Events. The girls are very professional and hard working. They do the best they can, replying to numerous questions from fans, trying hard to get even the big names for their events and are always friendly and polite. When I would jump right out of my skin because of some people who obviously have never heard anything about „manners“.

I have to admit that I was a little skeptical about the convention. Cause in my years as con-attendee I’ve learned my lesson well. Big expectations can lead to bigger disappointments. There’s nothing worse than to spend a fortune and then to return home frustrated. Because of what sounded so well in the beginning then ended in a disaster.

In the case of Lunar Eclipse everything went smoothly. From ordering the ticket, to booking a flight and hotel room, up to the lineup Entertainment Events came up with. I’m sure we all know this nagging feeling when, at some point, things go too smoothly. So I couldn’t help myself but waited for something to go wrong. Waited for something or someone to come along and spoil all the fun.

What happened? Nothing. Not a single thing. Everything went perfectly. That’s almost a once in a life time for me.

Entertainment Events main event location is the „Hilton Hotel“ in Düsseldorf. A beautiful hotel with friendly, patient staff. I tested their service when I had trouble using my keycard in the elevator, over and over again. Me and keycards. Some day I’m going to write a book about it.

The con was a small one, which was great. The stars obviously felt comfortable, the fans felt comfortable as well, and the whole atmosphere was quite laid back. Again, registration went smoothly. I met people I hadn’t seen in ages and made tons of new friends. During the autograph sessions the stars really took their time to talk to each and every one of us. Gifts were exchanged, I felt like I was walking on clouds.

The panels were awesome. We laughed, we cried, we hooted, we applauded, we took tons of pictures to capture every moment. Some funny questions were asked, background stories were told, some stories from the set were shared. Orny Adams was a helluva MC. He said that the German audience is easy to entertain. Because we laughed about almost every joke he made. Sometimes, I forgot that I sat in a hall with hundreds of other fans. I sat there with my heart in my throat and felt like a child under the Christmas Tree. With sparkling eyes. Totally hypnotized.

Speaking of a Christmas Tree … As the con took place at the weekend of Nicolau’s day, we had the chance for special M&Gs called „Secret Santa.“ Attending some of them was really worth it and special. For stars and fans. And they were also very easy going. It felt like sitting at the table with all your loved ones and not with people who had just met each other. I swallowed when we had to leave.

Yeah, and I swallowed also when it was over. No other event I’ve ever attended went by that fast. It didn’t feel like a weekend it felt like hours. The cherry on top were the really, really awesome Photo Ops. It was the perfect ending for a perfect convention. Of course, some people would be complaining about things. For me it was one of the best events I’ve ever attended (and I attended 15 so far).

When „Lunar Eclipse 2“ was announced, I bought a ticket at once. I didn’t have to think twice. And so should you! Entertainment Events have already announced Tyler Posey, Cody Christian, Seth Gilliam and there are still more star announcements to come!

Beforye Entertainment Events is howling with the pack they are bringing Supernatural back to Germany at the Purgatory Convention feat. Misha Collins (only SAT), Rachel Miner, Mark Pellegrino, Osric Chau, Travis Aaron Wade and probably more guests, who are still to be announced.

From my experience, I can tell you one thing: if you’re looking for conventions with heart and soul, great guests, nice people and a top location, check in with „Entertainment Events.“ You won’t regret it!

EXCLUSIVE – WIN A VIP TICKET FOR THE PURGATORY CONVENTION

Purgatory: You want to win a VIP Ticket to PurCon? Tweet about us and use the hashtag #PurConVIP. We'll raffle the winner next Friday.